I started using the Road Back Recovery system about 2 years ago to come off Valium. I started on Ji ...
Apr 26, 2018Verified Purchase
See all Store Reviews 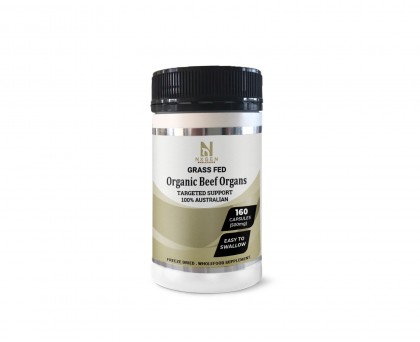 Multi-glandular's offer nourishment that may support ones own physical and mental health, happiness and mood.  Organic Grass Fed Beef Organs can help nourish the soul, providing a unique combination of vitamins, minerals, peptides and enzymes to help  heal damaged cells.

Liver is the most widely used glandular supplement for its vast number of vitamins and minerals. The liver is the chemical factory of the body and feeding the liver can help when other approaches have not been effective. Historically, bovine liver has also been used for anaemia and for support [6]. 100% Grass Fed Liver provides critical nutrients to support a robust immune system, overall strength and athletic performance, energy, libido, and weight loss.

Heart extract is used by people with low blood pressure, overwhelming fatigue, people who need strength, people who feel cold, and athletes interested in improved performance. It is normally best not to take heart extract late in the day (at breakfast and lunchtime is best for most people), as any heart glandular support product can affect sleep if taken late in the day [9]. Heart extract tends to show its benefits rather quickly (within a week or two for most people) and is also used as an aid in glucose uptake and the manufacture of ATPs [6].

Kidney tissue has historically been used by those with urinary tract disorders and since it is high in selenium and B12 is used for thyroid health while the DAO component is used for improved histamine management and to help with allergies.

Pancreas is instrumental in the regulation of blood sugar and is one of the most important organs related to a healthy digestive system. The pancreas produces trypsin and is operational in intermediate protein metabolism [6]. Bovine pancreas is often used to assist in the digestion of  foods.

Spleen extracts have historically been taken by people with allergic reactions (hives, canker sores, cold blisters), lymph node swelling, blood concerns (anaemia, lymphocytosis), demineralisation accompanied by hyper-irritability, as well as those with lowered resistance to infections and boils [14]. Some have suggested that bovine spleen “may aid in the elimination of allergic breakouts” [6].

Consuming glandular's helps directly supply enzymes. Enzymes are biological catalysts that encourage metabolic, catabolic, and digestive processes in the body. They help rebuild and detoxify. Enzymes tend to be specific, such as eye enzymes tend to help the eyes, but are ignored in the ear. Enzymes help the respective organs they are involved with function better.

Glandular's contain nutritional peptides, enzymes, and substances believed to be hormone precursors. Although some believe that oral consumption of dried glandular's is no different than consuming any other protein-containing food, this belief appears to be based on the fact that the stomach breaks down proteins into their constituent amino acids and that there is no benefit from consuming foods containing specific peptides. However, this belief ignores the fact that some ingested protein is not broken down into its constituent amino acids.

Evidence suggests that with oral consumption of glandular extracts, a small percentage (5-10%) of their peptides are not broken down into their constituent amino acids but are available for intact absorption in the small intestine [19-22]. A small amount of these absorbed peptides then circulate and some of them appear to assist the human body (especially for ill persons) in performing various anabolic and catabolic processes [18-22].

Howell and others have reported that the amount of enzymes that pass through the stomach is even higher (nearly 50% [23]). Howell has also reported that individuals with significant health problems have been found to have lower levels of enzymes than healthy individuals and that oral enzyme supplementation has been helpful for many such people [22]. Although this position is not universally accepted [24], a study in the Journal of Surgery showed that oral pancreatic supplementation resulted in improved enzyme and growth levels for children who had a pancreaticoduodenectomy [25].

Animal glands have been consumed since the beginning of history [35], and even now scientific studies involving them are being published [e.g. 36]. “Glandular products have been produced and used in the U.S. for over 60 years with absolutely no reports of microbial contamination or resultant illness” [36]. They are consumed in many countries, including the U.S. as food [35,38]; they may even contain substances to reverse diseases associated with Western diets [35]. Regarding glandular's, it has been reported that, “overdosing is not a concern. Even when excess amounts have been ingested, the body can easily demonise them” [35].

Harrower, a pioneering researcher of oral glandular's, believed glandular's were effective because endocrine glands experienced something he referred to as “hormone hunger” [33]. Harrower wrote:

“The practical application of this idea concerns the administration of combinations of glands in presumed pluriglandular disturbances. If, for instance there is a noticeable deficiency in several of the glands of internal secretion, the liver, heart, kidney, pancreas & spleen for instance, there may be varying degrees of hormone hunger on the part of those organs involved, which will influence very definitely the amount of hormones that may be missing or needed by the glands to be stimulated.”

It should be noted that when Harrower used the term “hormone” this probably should be interpreted to also include nutrients, both known and unknown, including enzymes, peptides, and hormone precursors.

Directions for use:  Adults  4 capsules a day. Always consult your health practitioner prior to use.